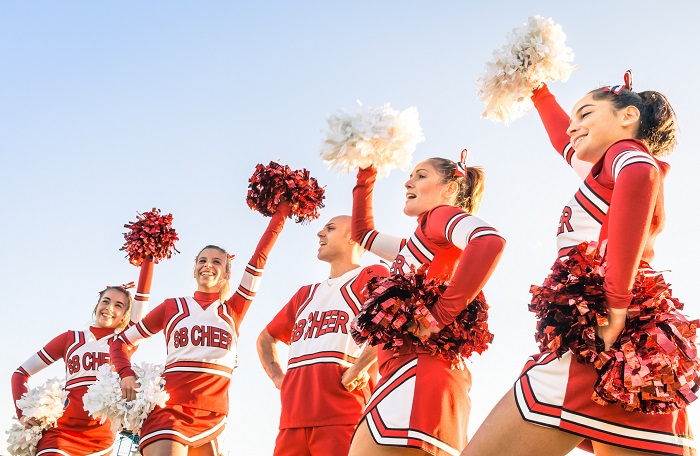 A Group of Cheerleaders in Action

Posted By: Patrick A. Loeraon: December 04, 2017In: Chiropractic BlogNo Comments

Many people wouldn’t believe that cheerleaders get injured as often as they do, but that’s only because they don’t know many cheerleaders. As the numbers have it, according to the National Center for Catastrophic Sport Injury Research (NCCSIR), cheerleading is the top sport for women athletes and it ranks second among sports with the highest catastrophic injury rate (nccsir.unc.edu, 2016). Football is the top sport for most catastrophic injuries. Since its inception in 1898, cheerleading has become a lot more than just leading the crowd in cheers. Cheerleading has become more athletic with highly athletic moves in group routines and it has become a competition in which teams compete for a national title. Yes, cheerleading has become a highly competitive sport that involves some serious athletes, and even these athletes can be injured from overexerting themselves during play.

Just like any athlete, cheerleaders are also prone to injury based on the moves they demonstrate. According to the National Institutes for Health, the number of injured cheerleaders each year in the United States has more than doubled in the past 20 years (ncbi.nlm.hih.gov, 2010). This injury statistic is primarily based on the type of cheerleading routines that cheerleaders are engaged, such as gymnastic-style tumbling and stunts with partners that involve lifts, tosses, and catches. Since cheerleaders do not wear any type of protective equipment or padding, a fall or an overexerting turn or stumble may result in a potentially dangerous injury.

If you are a cheerleader and have been injured during competition and are looking to improve your range of motion, contact your local chiropractor to schedule an appointment today.

Chiropractic care is an excellent solution to treat and prevent many of the injuries that cheerleaders experience from their performances. A chiropractor focuses treatment on the entire body as part of giving the spine the valued attention it requires. Also, a chiropractor may apply soft tissue techniques to the body as part of relieving pain and discomfort. In treatment, depending on the injury, a chiropractor can help cheerleaders recover from their injuries by promoting unimpinged nerve communication in the body. A pinched nerve or an out of place vertebrae can cause a tremendous amount of pain in the body, and they can even lead to other health conditions if left untreated.

Today, many cheerleading teams have begun to employ a team chiropractor, or they have partnered with a well-known chiropractic office where team members can go for treatment. Chiropractor care is intricate in improving a cheerleader’s range of motion, which can also contribute to preventing injuries during performances. Sprain and strained muscles and ligaments can both be treated by a chiropractor.

If you are a cheerleader and have been injured and are looking to improve your range of motion, contact your local chiropractor to schedule an appointment today.

Patrick Loera is a Staff Writer and Content Creator for Chiropracticcare.today and other medical blogs and websites. Although he is a Washington state native, he graduated from San Jose State University in California with a Bachelor of Arts in English with a concentration in Professional and Technical Writing. Patrick considers himself a middle-aged athlete, and he has experienced the benefits of chiropractic care firsthand. He currently works with several medical professionals—DCs, RNs, MDs, and college professors—to produce chiropractic content that can help people understand how to keep their body healthy, how injuries can be treated through chiropractic care, and what to expect from a chiropractor. Patrick spends his spare time playing basketball or relaxing on the beach reading a good memoir or mystery novel.